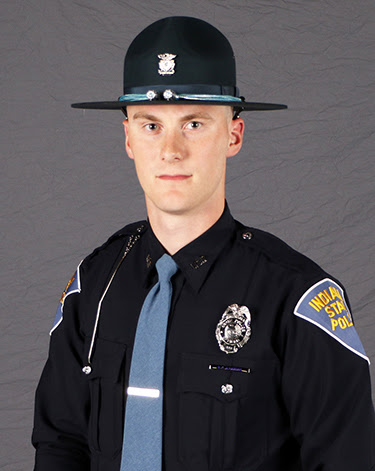 Fort Wayne, IN - On Thursday June 16, 2022, eighteen probationary status troopers were graduated from the Indiana State Police 82nd Recruit Academy. From this group of newly appointed troopers, the Fort Wayne Post welcomes Trooper Bryce Kanning to the ranks of District 22.

Trooper Kanning is a native of Fort Wayne, and currently resides in Columbia City. He is a 2017 graduate of Concordia High School, and prior to being accepted into the State Police Recruit Academy, he worked as a confinement officer at the Whitley County Sheriff's Department. Alongside his commitment to serving his community as a State Trooper, he is also currently enlisted in the Army National Guard, where he serves as infantryman at the ANG Armory in Bluffton, IN.

Trooper Kanning and each of his classmates have completed nearly 1,200 rigorous hours of structured law enforcement curriculum to get to this first milestone in their young careers. Their training curriculum while at the academy included criminal law, traffic law, emergency vehicle operations, physical fitness, psychology, vehicle crash investigation, self-defense, use of force, first responder, firearms training, and other general law enforcement related training requirements.

With the academy behind them, these probationary troopers now begin their next phase of instruction, which is a three-month field training period where they will be working alongside and under the close supervision of a Field Training Officer. Once they have successfully completed the field training program, they will then be assigned a state police patrol vehicle and begin their solo patrol duties.

Trooper Kanning's primary area of assignment will include Huntington and Whitley counties. As a public servant, Trooper Kanning will be expected to fully immerse himself into the communities in which he lives and works. So, if you happen to see him out on patrol in your neighborhood, please take a moment to introduce yourself and establish a positive relationship your new State Trooper.

Individuals seeking information on a career as an Indiana State Trooper should go to the website located at www.indianatrooper.com. This website will provide a detailed synopsis of the application process, as well as career information about the Indiana State Police Department.